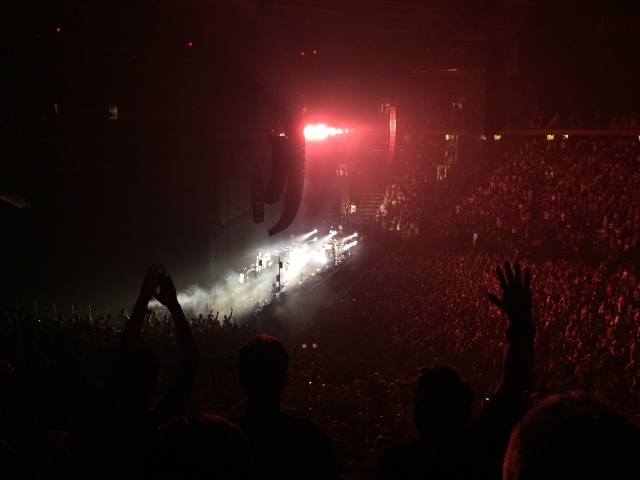 I got last-minute tickets to see Radiohead play at Madison Square Garden this week. I tried to buy them online like everyone else but it was impossible. Radiohead are my favorite band, and one that I have followed since their very first album Pablo Honey. I remember finding a small photocopied interview with the band just before they released The Bends in the pre-internet days of 1995. I don’t think a band can possibly create that type of interest or mystery due to social media these days. I read the interview so much I’m pretty sure I could recite it word for word even now. My first Radiohead gig was in Galway in 1996. My girlfriend and I took the train out west and camped outside their hotel singing their songs with a large crowd. Later we sang along with them at the Castlegar Sports Grounds. A mix of Pablo Honey and The Bends were started off with My Iron Lung. They even played some new songs that would appear on OK Computer the following year; Let Down, Electioneering, No Surprises and Lucky along with the rare but brilliant Lift.

The following year they returned after the release of OK Computer and I received tickets from a radio station competition (Name three other bands from Oxford). They played the RDS Arena to a frenzied crowd that heaved and screamed to every song. It was the gig that inspired the song How To Disappear Completely.

Q: “What springs to mind when you look back on 1997?” Thom: “We did this show in Dublin which was by far the biggest show we’d ever done, and we were headlining in front of about 33,000 people. It was sheer blind terror. My most distinctive memory of the whole year was the dream I had that night: I was running down the [River] Liffey, stark bullock naked, being pursued by a huge tidal wave.” Q: “You could have a ball psycho-analyzing that one. Do you know what dreams mean?” Thom: “No. But I find it imperative that I write them down, just for my own sanity.” – (Rolling Stone, December 1997)

I have not been able to see them since that show. To be honest they lost me after Kid A. I left home and travelled for quit some time, the only music I had were the CDs I lugged around in my backpack. They weren’t playing Kid A or Amnesiac on the radio stations where I was passing through. To be honest, that whole part of my life is a bit of a blur, 2001 – 2004. I ended up in New York, quit music and pursued comedy and  writing for a time. I eventually returned to music and rediscovered Radiohead’s later material. Just last year I bought Kid A on vinyl from a local record store that also sells my own band’s records. Full circle.

I’m not sure exactly what it is about the band that grabbed me beside the obvious, great songs. There was a mystery to them, but also their blunt unpolished assessment of modern living, especially on OK Computer. As I was realizing that what I was learning in college wasn’t what I wanted to do in life when I graduated, they released OK Computer. It pretty much summed up the lifeless dead-end existence I was rushing towards. They were also the only band besides Pink Floyd that I felt could create entire soundscapes for me to get lost in. Their music was bigger than the band, and that’s as best a band could ever wish for. Radiohead at MSG was amazing, and worth the wait.