As Marisa reads by the water, I’ve been slipping out for adventurous drives in the new car. I tune into some obscure chatty AM radio station, turn it down low and explore the winding wooded roads towards the north shore. I found an empty shoreline with two antique chairs facing the water side by side, I plan on returning with Marisa at some point. Seagulls flew in front of the car dropping shellfish on the road and returning to eat the squashed remains my wheels left behind in an unsettling display of animal intelligence. This along with them trying to steal my food on the beach through ever more increasingly genius methods each day has convinced me that seagulls will soon be our new overlords.

Today I drove to Camp Hero and viewed the abandoned military ruins. I’d been meaning to do this on every previous visit to Montauk but wandering through the empty park long after the tourists had returned to the city was worth the wait.

I also discovered a farmers market on my return trip, the produce of which is being cooked up by Marisa while I type this. Did you know there is such a thing as Tiger Tomatoes, or is it Zebra Tomatoes? I could ask again but I’ve been told ten times already. Anyway, they’re stripped and look pretty awesome. We’re keeping them for tomorrow.

Later, with chilled beer and marshmallows we will set up a fire on the beach and resist the urge to go running into the waves. Although I swam a little today, we discovered that we are far more adventurous when drinking. This Saturday armed with some ungodly cocktail we plan to do some drunk dipping. Marisa’s fear of fish is considerably diminished when inebriated. 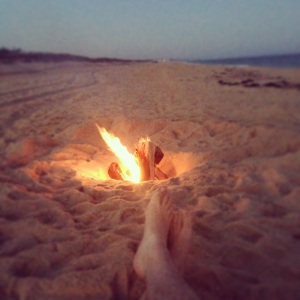