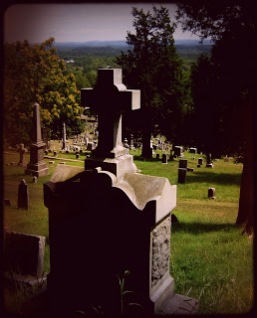 Two nights was all I needed. I’d take my laptop and head upstate alone to the smallest town I could find and dissolve myself in it. I had a romantic notion that in isolation I would finally finish that short story or other loose end I was lost and tangled in. The train trip was long but the walk to the hotel was short. The main street was both the good and bad part of town. Everything looked haunted.

I dropped my bag off at the hotel and spent a few hours walking around the outskirts of town. I always gravitate to these places as they’re the most interesting, the graveyards being my favourite. Always empty, even on weekends and it’s the only place to find guaranteed stillness no matter where you are in New York. I watched the distinctness of the gravestone styles fade as they got younger. Some were so old that I could only read them by tracing the worn letters with my fingers.

I tried writing in a coffee shop but the staff and fellow patrons were trying too hard to be a hipster cafe. I stocked up on booze and returned to the hotel. I set in for the night with my laptop and got to work. After a few hours of writing the booze kicked in and I decided to do what I love most and reached for my guitar. I’ve always mixed up the importance between the two. I learned to write but I found music. The last thing I remember was sitting on the porch with my guitar drinking beer beside a candle watching the house lights of the street slowly fade out.

I spent the following day staring at deer staring back at me confused from within various abandoned buildings. The kitchen of a house, a gas station forecourt or a train station storage shed. I had rented a bike and ventured further from the town in a bid to burn off my hangover. I found a disused railway line that once connected the town to a river port. It was lined with several abandoned buildings from more prosperous times. As I cycled past each of them I tried to imagine the people that once lived there.

I should have been writing but I had the sun on my face. I was too damn happy cycling through webs of light, down small tree-lined back roads. I was as far from people as you can possibly be in New York.

Later that afternoon I found an old bar near where the railway line cut the corner of the town. Inside was dark, long and narrow with a covered pool table at the back. The bar itself was small, overstocked and tended by a middle aged woman too large to function in it but she did. Her actions as she served the three barflies were as mechanical as a submariner under attack. I bought a beer and listened in on the locals. A tall thin man walked in and scanned the bar. His black hair was combed back by manic hands, his wild eyes never blinked and his mouth hung permanently open. He let out a squawk, and then another. The locals ignored him but the bartender stared at him in curious silence. He squawked again before I recognised the sound, early morning crows. He continued trying to communicate like this before he stormed out frustrated. Nobody mentioned what had just happened. Unusual, that a man would try and order a beer speaking as a crow and nobody even comments on it. Two barflies staggered out into the evening and left just me and an elderly man who had been quiet since I had arrived, lost in his own thoughts fumbling at a notebook. The bartender started a conversation and we spoke about nothing for half an hour before I decided to leave.

It was dark so I made my way to the lights of the main street and hit a place I’d seen earlier. Inside was an old bookstore that doubled as a bar at night. A band was was setting up so I decided to stay. On a shelf near the back I seen a book on hunting with a deer on it’s cover staring back at me.

After my second beer I looked up and saw The Crow Man at the end of the bar, he let out a squawk and the bartender poured him a drink as if fluent in his language. He smiled to himself, licked his lips and sat waiting for the band. A short time later he squawked again and the bartender brought him another beer. He smiled at a few locals and they smiled back.

The band started up and were beyond terrible. An incoherent mash of inconsistent rhythm and disconnected melodies cut through my beer buzz and left me feeling nothing but anxious. Their family and friends cheered them on but their growing confidence brought no repair to the broken ensemble. I had one more beer but it didn’t help. The Crow Man was loving it while the staff and barflies tried to talk amongst themselves against the onslaught. In between songs the silence was stolen by squawks of approval and beer requests.

I left early so I could catch the liquor store before closing. When I returned to the hotel I sat on the porch and wrote about nothing in particular in silence with beer. One by one all the houses turned off their lights again and the stars burst into full bloom. What a strange little town.

Waiting for the train home the next morning gave me the time to conclude that these breaks from the city were not as productive as I had romanced.

When the train entered the city I felt the comfort of distraction. Buildings sang with people, crowds heaved like music on platforms and cars shifted light around in the darkness. I love living in a city. The last three days were the adventure I wanted, and yet, again I was glad to be home. Sometimes you get what you want and it just doesn’t feel right.

Emerging from the train station it began to rain. I waited in a long faceless line for a cab home and thought of the silence of the graveyard and it’s sunlight. I thought of what it must be like to have all you were carved in stone, weathered by storms and read by strangers’ fingertips.

Note:* New York Shots are those small moments that happen while living in New York. They’re so small that they are rarely mentioned yet take up considerable space in various notebooks I carry around with me at any given time. This blog was started as a writing exercise and I thought this would be a nice way to write shorter snippets of life in NYC. They won’t always be interesting but I don’t want them forgotten either.