Earlier this week I headed out to Breezy Point to review several damaged homes due to Storm Sandy. I had to estimate the cost of some repair work and I spent most of my day in basements that smelled of ocean and backed up sewerage systems. I had heard about the damage done by the storm but to see it first hand was quit shocking. Army Humvees lined sand covered roads, The Red Cross unloaded outside twisted toppled homes and I seen several signs that read “Free Food Here” scattered throughout. The whole area felt more like the set of a horror movie.

After my work was done I decided to take a walk towards the water where the brunt of the storm had hit hardest. It had been raining all day, but it seemed louder now due to the silence of the whole area being unoccupied.

Up and down the beach debris lay scattered in the sand, some recognizable, some not. The houses they were torn from stretched twisted and broken as far as I could see. It would be a long time before people could return and live a normal life again.
As per usual my mind began to wander. I am an avid fan of The Walking Dead and am currently reading Word War Z. I thought about how the world would look if those scenarios came true and I guessed the landscape would be something like what I was looking at.

With that thought in mind I began making my way back. That is when something caught my eye. Instinctively I knew I saw people but the whole area was void of any.

There was a house that remained mostly intact and in one of the windows was something. I saw a person, or person type thing. There were a few electrical crews doing the rounds trying to get power up and running but this person, these people looked different. Something wasn’t right. 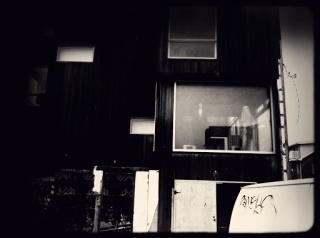 I stood shocked trying to understand what I was seeing before I realized what had happened.

Someone had left their halloween decorations up during the evacuation.

For a few seconds I wondered if my heart would ever beat again.

Admit it, you would have had the same reaction.