We took the Indian Pacific Train from Perth to Adelaide. It would take three full days on the world’s longest stretch of straight rail track through the unchanging scenery of the Australian bush. There would be two stops along the way so we could get out and stretch our legs. I had my camera, my journal and my guitar. I would take photos, write, play music and enjoy the experience as best I could. That was the plan at least. Taking a year off to backpack around globe meant I had already had my fair share of long train and bus journeys. I was well used to it, or so I thought.
We slowly pulled out of Perth and through the course of the day watched all signs of civilization fade to red dust out the window. It was exciting to be moving again. The romance of departure always outshines the harsh reality of arrival.
I was glad to leave Perth, work was hard to find and when I found it, it was backbreaking. It wasn’t an unpleasant experience, just a tough one. I had been unlucky for too long, too many times. I needed a change of scenery, we all did.
Our first stop came that night for a few hours at Kalgoorlie, a mining town known for its topless bartenders (skimpies) and brothels that straddle a colossal open pit gold mine. We took a brief tour of the town, peered in some brothel windows and then grabbed a few beers at a local skimpy bar. We sat amongst the tired locals and joined in the admiration of the busty skimpies. Later when the train’s horn cut through the town we reluctantly made our way back to the station as sure-footed as we could.
By day two I was slowly starting to lose my mind. The overpriced toasted cheese sandwiches on the train were as bad as the tea they served, as bland as the view out the window. It was unfortunately the only nourishment that was palatable from the kitchen. The train unexpectedly slowed to a stop beside what looked like the set of a Mad Max movie. Corrugated sheets of metal formed a perimeter wall and large truck tires weighed down sheets of plastic placed over the structure acting as a roof. The train’s horn drew out from it a tall old man with long hair and even longer beard. There was a conversation and food and water were thrown from the drivers section of the train. The conductor explained that the man had built his house from trash found along the railway line and the passing trains stopped to check up on him, unofficially of course. He seemed like quite the celebrity in this empty part of the world.
As the scenery repeated itself outside the window I moved around the train in a desperate attempt to occupy my mind. I could not write, my guitar lay silent on the seat and my camera was rendered useless after just one single photograph out the window a day before.

Cook was a ghost town in the middle of nowhere. It was our second and last stop before Adelaide. We all abandoned the train and wandered into what was once a railway support town to stretch our legs again. Miles from anywhere, it had been bleeding its population for the last decade or so. As I bought come chocolate from the town’s only shop, an old woman explained that the population was currently only 4 people.

I don’t have any photographs of the town itself, as the first thing I did was walk to its edge and photograph nothing, miles and miles of nothing. Roads disappeared to nowhere, I had never quite seen anything like it. Absolute silence. Of course it had numbed me for two days as it sped by through the window, but to stand in its static beauty was really something. I kept an eye out for snakes and other such bush fare but my overall concern was the fear of being consumed by the growing feeling of not being wanted. I was an unwelcome visitor. I looked back at the town, the scattered buildings and the hulking train laying beside it. Year after year it would slowly fade away like a veterans parade.

I can remember the remaining town folk being friendly and we acquired water and snacks and a splashing of the local history. I explored a few of the empty buildings to kill time and to attempt to build an idea of what it must have been like with, well, more people. I remember peering into the window of an old school, I remember the shop and a few smaller houses that had belonged to workers and abandoned mechanical equipment that lined the tracks for supplying the train with fuel and water. Most of all what I remember was the surrounding bush. Unmoving, it stretched forever.

Maybe it was the heat, the bland food on the train, or the almost two thousand miles of straight track and unchanging scenery but this road sign cracked me up. I fucking lost it. Out here in the middle of nowhere in a ghost town of only four people was a road sign warning of a bend in a road that went nowhere. This photograph was worth the journey alone.

A fellow passenger told me to look at the front of the train. I asked why and he told me that it was covered in kangaroo remains and splattered with blood. The train had been hitting them as they crossed the tracks for the last two days and the front had apparently acquired a monstrous deathly facade. I decided to pass on the spectacle. As I boarded I saw him with his friend standing at the front of the train giggling and taking photographs at what I’m sure was a baked on memory I’m glad I don’t have. 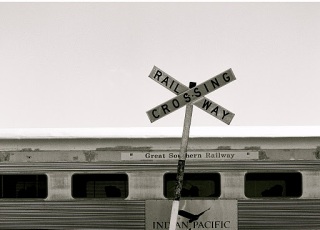 The train pulled out and we pursued the horizon for another day until we arrived in Adelaide early the next morning. After a few days of exploring the city we took another train to Melbourne. We rented an apartment on Little Bourke Street right in the heart of the city. I got a temp job filing claim investigations at an insurance company and ended up by accident/paperwork error with a 12th floor corner office overlooking the entire city of Melbourne. Not bad for a temp but I kept my mouth shut, dressed nice and made sure I came in early and left late. For some unknown reason, luck was always on my side while living in Melbourne and I had three long months of it.

Every evening I relived the most beautiful vision of an entire city lighting up at the end of the day. It pulsed and it heaved and it slowly burst into colorful life in absolute silence far below me. Constantly moving and changing it was always that much more beautiful when I thought of Cook, and that bend in the road.