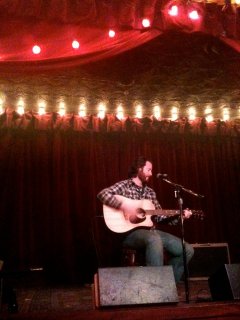 Last Thursday I was lucky enough to get to perform at the Jalopy Theater and School of Music in Brooklyn. It is a theater I had heard great things about from previous performers. The show itself, The Outcast Spectacular, was produced and hosted by The Bitter Poet and was billed as a night of Improv, Music and Freaks. I was playing my music at the end of the show so I got to avail of the free beer before hand, modestly of course. I thoroughly enjoyed all the other acts and The Bitter Poet, who I had done many shows with before, injected much humor between setups. My portion went well, I had fun. What more could you want?

The space itself like many other Theaters I have performed in New York was a hidden gem. Antiquated, rustic, and filled with old school charm. I played some toilets years ago and this was far from it. After the show I began my trek home to Astoria with my guitar but not before spotting a 1961 Thunderbird parked outside on the street. I got my good friend and fellow performer Sharon Spell to take a snap. The car fitted in perfect with the venue. Old but loved and carefully maintained. They don’t make them like they used to.